To those who have left behind childish things

Come on in.  I know the den is a bit dusty from disuse, and I could make excuses, but I won't.  There are some oranges to enjoy, grab a couple and pull up a patch of dirt.

A friend posted a picture on G+, and I've seen it before, in a couple different contexts.  Each time I've seen it I've had a tear in my eye, and today, I saw it and admitted to my love why it touched me. 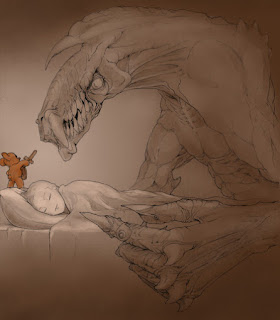 Even just putting in the image, I feel the tears well up, my chest hitches, and I go blurry eyed.  Like many people I know, sleep is not a friend.  I've always played it off that I can sleep anywhere.  I can do that because I'm always exhausted.  Cuz that little boy, he is me.

I've had nightmares every single night for as long as I can remember.  When I was young, around 8, they were so terrible, I would wake screaming, screeching, flailing.  My mother, a woman who tried her best to deal with a precocious, terribly troubled and troubling child, did everything she could to help.  Even brought in the church folks to bless the room, do anything.  They said it was my Masters of the Universe quilt.  I told them my nightmares went away after it was gone.  I didn't want to lose anymore stuff.

I remember being so small and scared in bed.  I had tons of stuffies lined up along the side, all silent sentinels set to scout any scourge to my slumber.  I believed in them to keep me safe.  I never had just the one teddy, I had at least five, and elephants, and monkeys.  All arranged to watch over me.

They did their job.  I never died of fright.  They helped me internalize what was so frightening, and I forced my dreams under my own control.  I wrested away from the night my terrors and dream lucidly now.  Hundreds of dreams.  I wake in the morning feeling I've walked miles, seen dozens of worlds, lived another week for each day.  I wake tired and worn.  Did when I was 8, I will when I am 80.

The nightmares have never stopped, and still I keep small things about to keep watch.  Until recently I always knew Xuxa was there to keep me safe, now it's Pixie's job.  It's my friends' job, who visit me in my mind as I attempt some form of rest.

But for those small, cheaply made, glassy eyed creatures.  Those little soldiers in a nightly war.  Those embodiments of my mother and family, and their love.  What I miss is their assured victory.  That 8 year old boy never died.  They kept watch with their simple weapons hidden, to defend me as that lone bear does above.  And I always knew I would wake up the next morning.

Leaving behind those childish things, I mourn for them, for the ability to know I will always wake up the next morning.  Because I don't know that anymore.  So to that end, I say thank you to those spirits that helped keep those little things on watch, those who maybe never attained the wish of one velveteen rabbit, but who, in their own ways lived to keep a frightened child safe.

I pray to the grandfathers to give me serenity of mind, that one day perhaps I will unlock the hidden parts of my brain to let loose its many demons.

I say thank you to those grandfathers for sending forth the guardians of my nights to keep at bay those demons, to help me keep the fight going.

I give honour to all those small things, much greater in my mind's eye now, that they have found their peace after so much battle.

Come on in.  There is no food right now.  Someone else will have to provide.

See that new shadow?  The one that is lurking near the edges and growls at the others?  That's Xuxa.  She left us today.  She was almost 16.  And a runt.  And so pretty.  So very pretty.  A calico who is best described as 3 lbs of cat and 30 lbs of hate, but limitless love for her family.  She never gave up a lap to cuddle, she growled and hissed when she was mad.  And she would talk for hours.

Later, I'll tell you stories.  But right now.  It's raw.  So very raw.  But my grandma gave her to me, and she's already gone south, so hopefully, she came around to show Xuxa to her new home.  We all love you baby girl.
Posted by Silent Winged Coyote at 1:55 PM 1 comment:

Silent Winged Coyote
Dad, Student, Cultural Critic, Pagan, psycho, asshole. All things that have been used to describe me. In the end, the most important thing is the people I love and the people who love me.