In the smoke tonight

Sit and listen with me.

Posted by Silent Winged Coyote at 11:39 PM No comments:

Come on in, I've got those yummy Greek chips with the feta, organo, and olive flavour.  So tasty.  So this was a response on effbook to the wonderful fun that is the political system.

Not that I want to disabuse anyone from their abuse of corrupt politicians, but apathy is a problem in our political system right now. It's part of the reason we get these screwed up governments.


I understand the frustration with our political system, but there's two ways to fix those frustrations and they are the basis of HOW our system was set up, and the reason it has stopped working well. The first thing you have to do is understand how our system works. There's a great number of books out there that explain our parliamentary democracy, and just understanding the system itself will allow you to understand the movements and changes that happen without frustration or feeling 'left out' of the process.

Number two is getting involved. How many people who are complaining about this have phoned the campaign office of every single candidate in your area and asked questions that are a concern to you? How many of you have researched how those candidates have voted in the commons (All the votes are online, and easily accessible) to compare what they're telling you vs how many times they just toe the party line? How many of you have actively promoted the candidate you want to vote for, helping debate and information sharing amongst yourself and others?

The thing is, the two most important discussions that need to happen are politics and religion (In a very broad sense) yet we're all told, 'oh don't talk about those things, they just cause arguments.' Maybe we need a few arguments. Maybe we need to feel ok to get pissed at one another every so often, as long as we don't hold a grudge or make it personally.

My point is, the system isn't inherently broken. But our treatment of it is. Get involved, do the basic research, participate. We get the governments we deserve. With our apathy riding so high, with voter turnouts of about a third of the population and less than that actively engaged in the process, we're going to get governments that abuse us. Because the perception is, the Canadian public doesn't care. Let's show them we care.
Posted by Silent Winged Coyote at 10:24 AM No comments:

How do you see me?

The fire is lit.  We begin

How do you see me,
What do I mean to you,
Why do you watch me,
When do you want me,
Who am I to you?

I see you as a part of me
I define you by the difference
I look for the strange
I want the times when I am not
I see and embrace your faults
Posted by Silent Winged Coyote at 2:06 AM No comments:

Come on in, I picked up some sour cream and dill chips.  They're quite tasty.  Enjoy those and the fire.

So there's this.  Watch the video too.  See how far this stupid shit goes with online crap and bullying.

So here's the thing.  I was a fat kid who got picked on.  I was always taught not to fight back.  That was always bad advice.  I know that now.  I should have been taught to fight back in suitable means.  This kid, Casey Haynes, he did what he knew to do.  He picked up the little shit head and slammed him down.  He exerted his right not to be hit and demonstrated not just to the one bully, but to all of them, that he is not fighting back because he can't, but because he doesn't want to.

What baffles me about this is two fold.  Why do we insist on teaching our kids not to fight back?  And why do school boards with zero tolerance for violence policies insist on punishing the kids who are merely asserting their right to not be hit?

So first off.  This is what I've taught my children.  Always ask for acts of violence being perpetrated on you, aka being picked on, bullied, pushed around, etc., to stop.  After they stop listening to that, cause maximum damage with minimal effort, just enough to stop the assault on you, and then walk away.  Both my girls know many ways to hurt a human body in horrific ways and when to use them.  The eldest has defended herself.  The younger is a bit more bombastic than her sister, so hasn't had to yet as she's a level of intimidating all without violence.  Teaching your child to not fight back is not acceptable when other people do not teach their children not to be little shitheads.  Teach them to be non-violent until they are violated, then they should defend themselves from further possibilities of injury.

Next.  School boards.  Kids defending themselves should not be punished.  They should be praised.  Because they're doing what you're not.  Stopping bullying.  Bullies are stupid creatures that only respond to simple stimuli.  Like the idea that if I pick on someone, I might end up getting a face full of concrete.  If that kid goes on bullying, it won't be against Casey again.  And maybe some other kids will figure out it's alright to smack down a bully when they start getting froggy.

Here's the obligatory story to prove my point.  I was picked on for being the fat kid.  Until I grabbed one of my tormentors, threw him down, grabbed him by the throat, and beat his head against the playground until he almost passed out.  The only reason that little fucker didn't end up in the hospital after years of bullying me was that his stunned friends hauled me off him.  They didn't try to pick on me while they grabbed me off him, or from that day forward.  In fact, they were all just a little bit frightened by me.  And if that's what it takes to get some asshat to stop bullying, then so be it.

I am not advocating the preemptive beating of these wastes of flesh, who's better half ended up in their father's pants, but I am advocating the suitable consequences for their unwelcome and idiotic actions.

Oh and the right to smack the crap out of parents who are obviously creating bullies out of their children.  Suitable consequences for suitable actions.
Posted by Silent Winged Coyote at 6:07 PM 1 comment:

What a year so far.  Hmm.  The fire is low and the smoke will be pretty intense.  You have to see far to see the range of this great man. 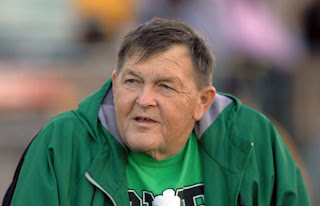 I proudly call this man one of my mentors.  One of my heroes.  He was a man of little education, of great wisdom, of untold humour, and unsurpassed caring.  Just do a google search for Brian Saip and you'll catch that from all that his been written since his death on this last Sunday.  And as with the passing of all great people, the world has lost a light, has become dimmer in one part.

I however know that the world is far brighter, and will continue to be far brighter for generations to come because of the work Coach Saip did.  He made it his business to make men of boys on various sporting fields.  I know this personally from my time spent on the Martin Monarchs from 1989-93.  He was my Head Coach all four years.  He took a fat kid who was nearly destroyed and waiting for a miserable unknown death, and gave him the tools and encouragement to be a man.  Few things in my life have impacted me as much as that time on the field did, as most can guess from my other writing, and few things mean as much to me as the activities I enjoy passing on the lessons Coach Saip taught me.

He was the first person to demand I not only be better than I expected, but better than anyone could possible expect.  He made me crave to succeed.  Not at the cost of others but to enhance the world around me.  He taught me the value of dedicated work, of properly administered discipline, copious amounts of compassion, and self-respect.  He was the first person to recognize my need to create myself and control my identity, encouraging even the most outlandish ways I expressed it.

His example is the one that I employ on the football field when I coach now.  I do it my way, but in his tried and true measure.  I owe him that passion that allows me to believe that his death is not the end, merely another beginning, another generation that will step up and do what is right for the world around them, as he did.

Because I know I'm not the only one.  I know there are thousands of us.  Thousands of men who served in Coach Saip's schools of battle.  Thousands of us who listened, learned, and acted.  Thousands who will take this loss and use it as the means to continue what he started.  Thousands to take up one man's great shield and standard, and bear it forward so that others will benefit.  There is a litany of names I could mention, names you'd all recognize for their great achievements, for their deeds, and every single one would point back to this man and say 'He showed me how.'  There is an entire roll of young men who might have been lost forever, who still make mistakes, yet come back because of this man.  The quiet unknown ones who owe a debt to Coach Saip.  Multiplied over by thousands of actions, on hundreds of thousands of days, and you see, there is no dimming of this great man's light.  There is only the forever exponential growth that will carry on beyond his own name.

Good bye, and thank you, from my heart and soul, Coach Saip.  Real men get back up.  We got this.
Posted by Silent Winged Coyote at 3:48 PM 1 comment:

Silent Winged Coyote
Dad, Student, Cultural Critic, Pagan, psycho, asshole. All things that have been used to describe me. In the end, the most important thing is the people I love and the people who love me.